(Cross-posted from The Urbanist.) 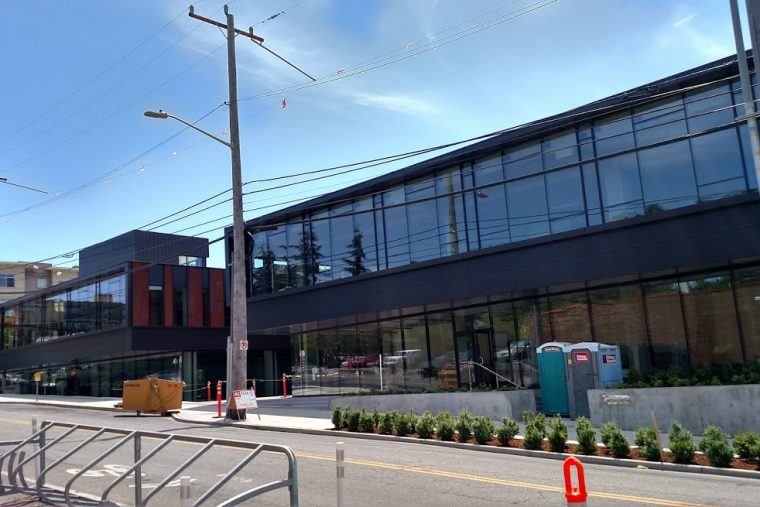 Wallingford is booming around Gas Works Park. AMLI Partners recently opened twin apartment buildings with 239 units, and the big Northedge office building (pictured above) is mostly completed and has been filling up quickly. Rapidly-growing data visualization software company Tableau rented up the entire office building and has been moving more people over from its Fremont offices, with 500 more expected soon. Plus, a month ago a new cafe called Acadia opened up in the corner of the building at 1651 N 34th Street, which is across the street from Essential Baking.

What do these changes mean for Wallingford? Well, the robust growth of Tableau, in addition to the boom happening on the opposite end of Lake Union, certainly appears to be driving up the demand for housing in the area. But these new buildings and workers also bring with them opportunities for new businesses like Acadia to take root. It’s not all bulldozers and destruction despite what the lawnsigns dotting Wallingford yards suggest.

As the name would suggest, Acadia has Cajun cooking including a shrimp Po’ Boy and a vegetarian gumbo loaded with greens called Z’herbes. The space is also decorated with nods to New Orleans such as the turquoise color palette–an homage to the bright colors of the Big Easy.

“We wanted it to be evocative of the patina you’d find in New Orleans so we tried to accomplish that with some of the salvaged items,” owner Annie Koski-Karell said.

Koski-Karell and her business partner David Rogers are trying to recreate a bit of the New Orleans spirit in Seattle.

“I was completely fascinated by just the variety and quantity of the art and the richness of the culture [in New Orleans] both the food and people and history and everything.” Koski-Karell said. “The reason we named it Acadia is because it tells a story of a part of American history that I think doesn’t get spoken.”

Through its epochs of French, Spanish, and American rule, New Orleans historically has been a melting pot, sometimes by choice and obviously sometimes not; it was the major slave market in the region.

“Our menu celebrates the convergence of the African, Caribbean, Native American, French, Italian, Spanish, and German culinary heritages that shaped the South and its cuisine,” she said in a Seattle Eater interview.

“We’re not trying to bill ourselves as authentic,” Koski-Karell said. “It’s an interpretation based of some family recipes from David, whose family is from the Gulf Coast in Mobile, Alabama, and some of our learnings having visited the area and done a lot of research.”

Although she didn’t boast of her resume, Seattle Eater filled in the gaps: “Koski-Karell has worked in the food industry for the past 10 years. Her resume includes time with José Andrés’ Thinkfoodgroup in Washington, D.C., and a stint as co-manager of Tom Douglas’s Prosser Farm. She also earned her MBA from UW’s Foster School of Business.”

Acadia serves Anchorhead coffee and espresso with an emphasis on light roasts toward the fruity and creamy end of the spectrum. Anchorhead is based out of Duvall, Washington and roasts fair trade, organic, and non-GMO beans.

Koski-Karell also lives just blocks away from her cafe in one of the new apartment buildings that just went up. Obviously that makes the morning commute a breeze not to mention fitting perfectly into an urban planner’s dreamworld: who needs to drive when you live two blocks from work?

Rogers said they plan to add patio seating outside as the weather improves. Proximity to Gas Works Park and the Burke-Gilman Trail does make this a high volume area for joggers, pedestrians, and cyclists. That foot traffic should only increase as Tableau fills up its Northedge office space, which has room for 1,300 workers. That’s a big office but Tableau already has more than 3,200 employees–the lion’s share in Seattle and more specifically in Fremont and Wallingford. Tableau will also be the major tenant of the new Fremont Office Building under construction a half-mile to the west.

Acadia’s menu is below if you care to peruse. 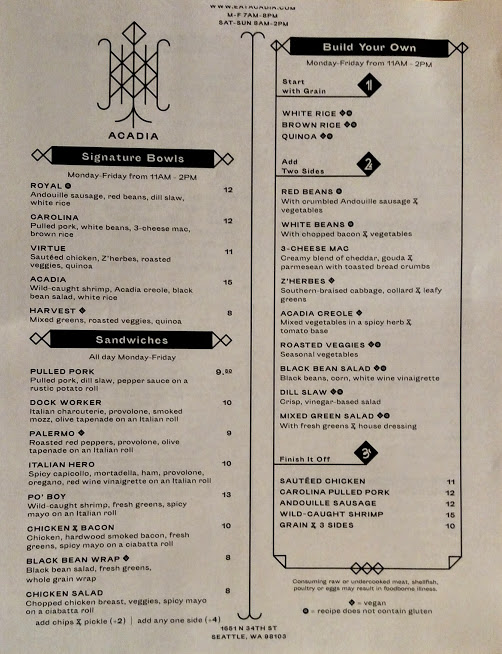 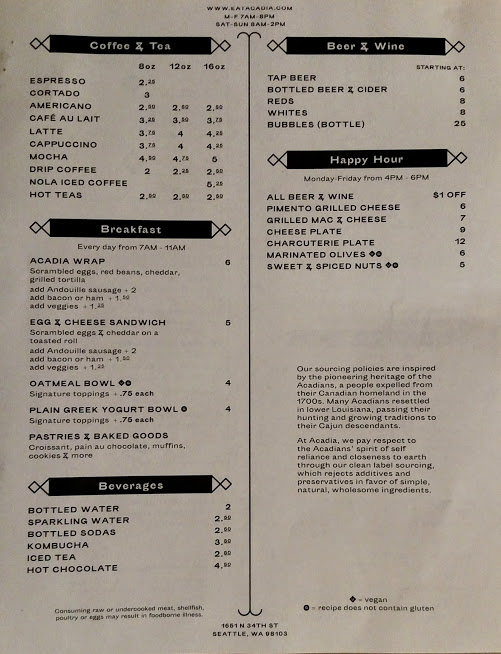 Doug Trumm is a senior editor at The Urbanist. He joined the exodus to Seattle in 2014, leaving behind his home state of Minnesota. Volunteering with the Minneapolis Bicycle Coalition and serving as an alternate on his local neighborhood association ignited his interest in urbanism. Reading urban planning greats like Jane Jacobs stoked that fledgling fire to an inferno. Living on disputed land between Wallingford and Fremont, he is doing his best to improve both neighborhoods.